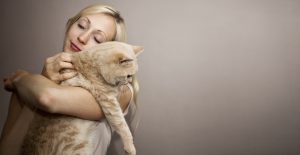 As an Animal Rescuer I have seen many beloved pets die from old age to Cancer.  When our white Manx became unexpectedly thin, holding her head upwards beneath faucets but unable to drink the water flowing out of  it, a trip to our vet gave us the news that she had jaw Cancer.  Afraid she may be suffering we took her back to our vet,  who allowed me to stay by her upper level cage, and for 2 hours I breathed with her.  Just a simple thing. But it meant the world to both of us.  I asked myself couldn’t I be doing this at home?  But putting her to sleep seemed the most compassionate action to end her pain.  When she sighed, and quietly pressed against the back of her cage, I knew   she no longer wanted any sensory stimulation.  I obeyed, and she died.

Something clicked inside me after Lacey’s death.  I remembered the stories of how cattle calm down when their bodies are compressed in a shoot with tight compression around their bodies. When my Golden Retriever was ready to pass from old age, she pressed against the wall in our tiny back porch, where she chose to end her days.

After several pet deaths, I have a much more open attitude about peaceful death at home.  The decision to put a pet  to sleep and not endure pain, is one compassionate choice.  When death is very near, there is a shut down and fear sets in as animal genetics warn them they are prey in the food chain. Cats, especially, crawl away to die in a drainage pipe, or a tiny foundation space. This is when we, their pet family, need to aid with compression and dim lighting in the comfort of their home.

As I walked in to a back room where my senior cat, Meeko, lay in what I thought was a comfortable dimly lit back bedroom, I found her panicked.  She looked frantically around her, as if not clear what she was seeing.  She was between worlds, not only terrified of being eaten, but as if the veil had become so thin between life and death, she felt like an alien in her once predictable world.

I swaddled her body in tight compression, rocking her gently against me.   I felt her fear, and it said “please hide me.”.  This is when I realized I had to create a small space for her to feel at peace, and her pet carrier was exactly where to start from. Packing clean towels and a soft blanket inside it, I created a cocoon hollow, and placed her dying body into it. After closing the carrier door, I leaned pillows on the outside on all sides which muffled sound and added more gentle compression. Leaving enough air space for her to breathe in the door, she immediately turned around, facing the closed side. Taking this as a cue, I zipped up her carrier, and placed a blanket over it.  I sat beside her and felt the peace of a comma set in her.  All this I did as if cued, silently, by Meeko.  With compression, darkness, and quiet she drifted in to death.

Compression and quiet mimics the tight space of a mother’s birth canal, just as when an animal enters in to this world.  Little did I know, as the veil disappears between life and death, that this same condition is important for a peaceful death transition for animals.

WE LOOK FORWARD TO WORKING WITH YOU

The Calling of Light